As closing event of the International German Gymnastics Festival in the metropolitan area of Rhein-Neckar from May 18th to May 25th, a stadium gala took place at the Carl-Benz-Stadium in Mannheim on May 24th. It was a special highlight with a colourful and diversified program.

3,000 participants in aesthetic costumes presented characteristics of the metropolitan area from Palantine wine to the Heart of Heidelberg and barrels of the BASF. As special highlight, former world champion Eberhard Gienger opened the gala with a parachute jump into the stadium. Every sequence had been planned minutely and was being controlled by timecode. Numerous highlights, like the rhythm pattern with over 600 drummers from Germany and Japan, enchanted the audience. Artists performed on staggering constructions that represented local buildings. Dance and acrobatics merged with world champions in parcours and breakdance to a final climax. Even the current male and female national gymnastics team and the national rhythmic gymnastics team presented peak performances at their sports equipment. Finally, 30 000 people danced a flash mob of the event and were integrated in the program at the climax of the show. The stadium gala was a show that will always remain in the hearts of the spectators. 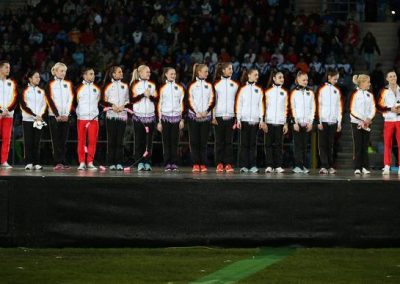 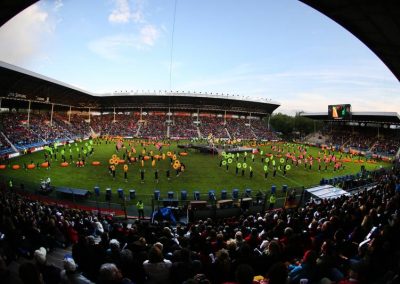 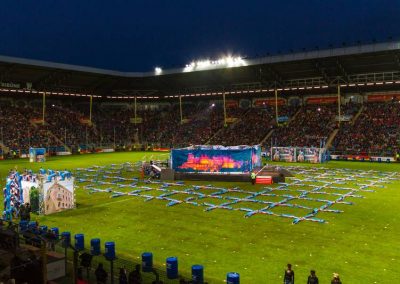 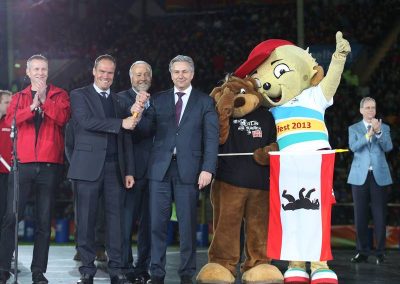 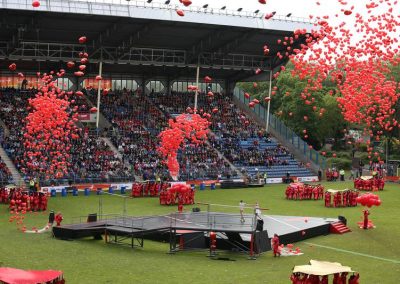 ISDC was responsible for administration and partly for the choreography of the event. After two years of long and intensive planning and preparation, the single show elements were joined to an overall concept and for this purpose music was especially arranged at the recording studios.
Diese Webseite verwendet Cookies um Ihnen den bestmöglichen Service zu bieten. Mit der Benutzung der Website stimmen Sie der Cookie-Nutzung zu. Zur Datenschutzerklärung